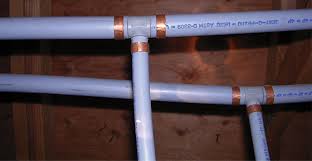 Photo credits : Poly-B.com
For years, the building industry has been constructing houses In North America with Polybutylene piping and fittings for plumbing. Between the years of 1978 to 1995, Polybutylene or Poly B was the major source of plastic material shaped fittings and pipes described as light grey in color. More than 700,000 homes in Canada have this as their major plumbing source. Recent claims have been coming out of the wordwork in relation to the deterioration and stability of Poly B. When exposed to extreme heat, such as water or sunlight and for extended amounts of time, the Poly B has been known to deteriorate, by cracking and then substantially breaking. High levels of chlorine and water pressure are also claimed to be a factor in its wear and tear.
Poly-B piping is no longer listed as an acceptable plumbing piping material in the current National Plumbing Code of Canada as of 2005.  Over the recent years, Insurance companies have raised concerns about the insurable liabilities and risk associated with Poly B. Lawsuits have been taking place over North America in regards to Poly B claims. It is important to know now, that for some owners, insurance is not possible, or if any, premiums maybe significantly higher than average. In some cases, renewal of an owner's insurance has been denied.  To further this concern, Poly B that breaks and causes water damage, insurers will not cover or insure the damage directly because of its attribution to Poly B. If Poly B becomes more of an issue in the next few years, most insurance companies will be opting out of insuring anything related to Poly B. For now, as acceptable coverage, insurance companies want all Poly B to be encased with copper fittings or collars on pipes and joints.  When purchasing your next home, especially a house built between the years 1978-1995, it a good suggestion to have an inspection for Poly B piping. As your realtor, it is important that we enlist such advice and input clauses as subjects to in your offers, realtive to this discovery. Ultimately, you will not be a happy purchaser, if this part is off set or ignored and as time goes on, this could be a costly procedure to replace and manage. Significant costs can rise as high as $15,000 to replace Poly B, all depending on the size of the home. To conclude, now is the time to check your home insurance if you know Poly B is going to be the source of your troubles.
Better to crack down on Poly B before its too late!
Sources of information & credits:
This article was written in 2016.
FYI Home Inspections Poly B - Know the Facts Fleetwood Building InspectionsIntact Insurance
Disclaimer: This article is for information purposes only and is not a resolution or indication of Poly B in your home.